Home » How Long Does LSD (Acid) Stay in Your System?

How Long Does LSD (Acid) Stay in Your System?

LSD, lysergic acid diethylamide, is an illegal psychedelic drug that causes vivid auditory and visual hallucinations. Often referred to as acid or lucy, LSD is a common drug of abuse in the party scene.

LSD is a schedule I drug, which means that it has no medicinal uses. This drug is not considered to be addictive, however, this does not mean that it doesn’t pose any danger. Acid is known to cause intense effects that may lead to lasting physical and psychological consequences.

While many people believe that LSD cannot be tested for, this hallucinogenic drug is detectable by urine, blood, and hair tests. If you or a loved one abuses LSD, understanding how long LSD (acid) stays in your system can help prevent you from taking too much at one time.

How Long Does it Take to Feel the Effects of LSD?

LSD may be swallowed as a capsule, ingested or absorbed into the skin as a liquid, and absorbed in your mouth in a paper square.

The effects of LSD may include:

If you take LSD frequently you may develop a condition known as hallucinogen persisting perception disorder (HPPD). HPPD causes flashbacks of hallucinations or delusions you experienced during your acid trips. Unfortunately, this could cause significant stress on your mental health and ability to function in your day-to-day life. 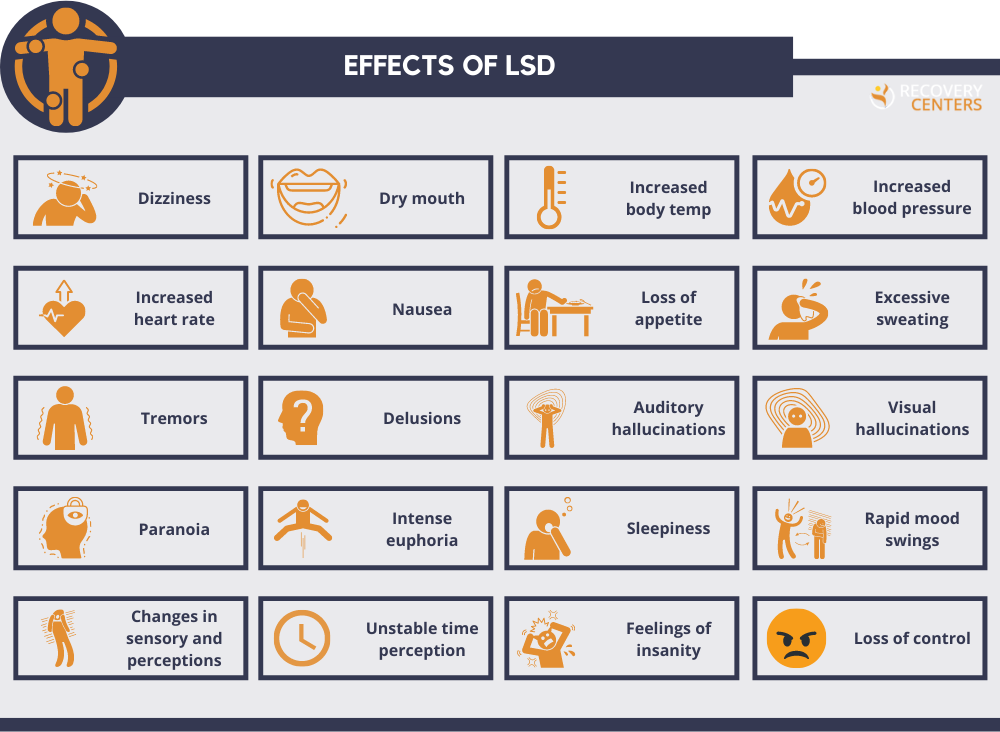 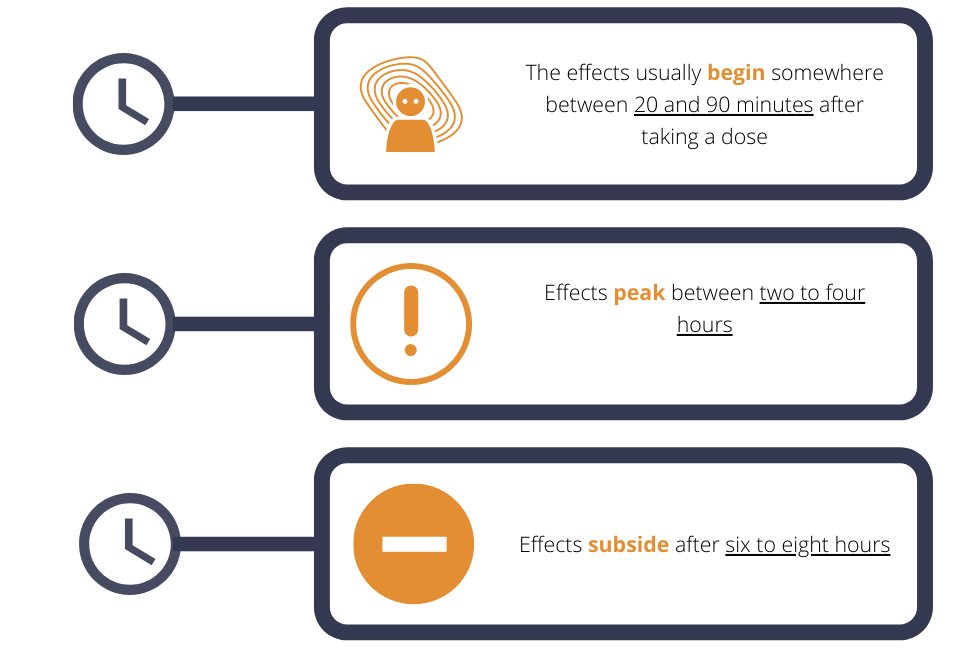 How Does Your Body Metabolize Acid?

According to research, the reason that you experience hallucinations while on LSD is because of how it binds to serotonin receptors. The serotonin 2A receptor has been proven to be involved in the formation of hallucinations and cognitive impairment associated with LSD use.[1] 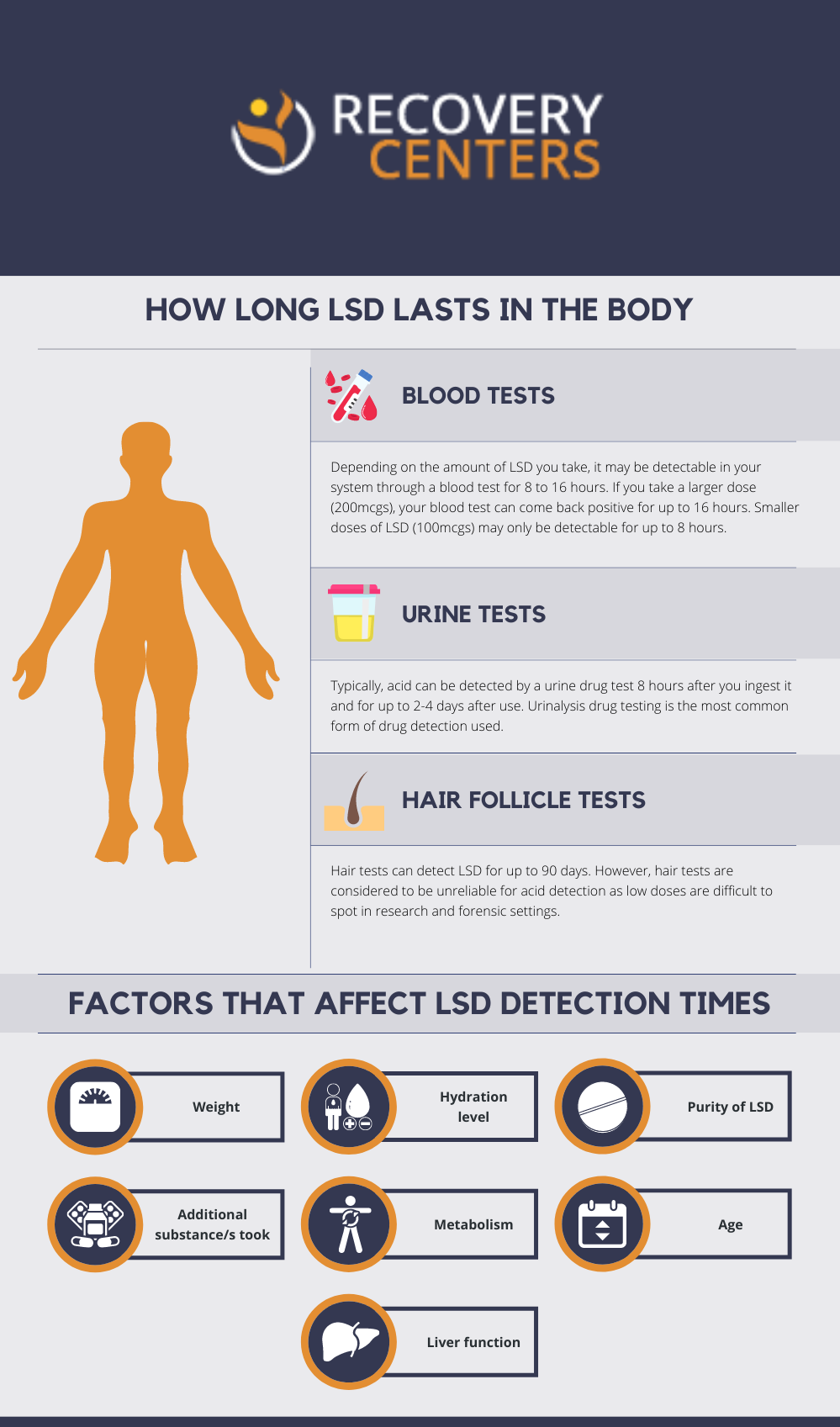 How Long is LSD Detectable in Your Body?

24 hours after you ingest LSD, your body will have metabolized and excreted most of the substance. According to research, up to 13% of LSD will be metabolized into 2-oxo-3-hydroxy-LSD. This metabolite of LSD is considered to be 16 to 43 times more detectable in urine than LSD itself.[2]

While LSD is detectable by urine, blood, and hair tests, the rapidness with which it is metabolized creates some challenges for detection.

Typically, acid can be detected by a urine drug test 8 hours after you ingest it and for up to 2-4 days after use. Urinalysis drug testing is the most common form of drug detection used.

Because blood tests provide such a short window of LSD detection, they are rarely used.

Hair drug testing is relatively rare, as it is the most expensive way to test someone for drugs. However, careers in government or law enforcement may require hair drug testing upon employment.

Hair tests can detect LSD for up to 90 days. However, hair tests are considered to be unreliable for acid detection as low doses are difficult to spot in research and forensic settings.

What Affects Drug Testing Detection Times of LSD in Your System?

Drug testing depends on the way your body metabolizes specific substances. Because of this, certain factors may affect how long LSD is detectable in your system.

For example, if you are underweight you may have a fast metabolism. This can cause substances to leave your body faster than normal, affecting the overall detection time.

Other factors that affect the detection times of LSD include:

Getting Help for LSD Abuse

If you or a loved one frequently abuse LSD, you could be facing an array of harmful physical and psychological effects. For example, long-term acid use is linked to the development of mental health conditions like psychosis and hallucinogen persisting perception disorder.

Attending a professional addiction treatment program could prevent you from developing the lasting effects of long-term acid abuse. Contact us today for more information on how to find help for LSD abuse.